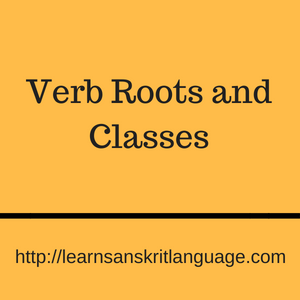 Now in order to learn verbs,  verb roots and classes are essential to be learned. Verb roots are basically the syllables from which the verb arises. As far as we know there are 2000 verb roots out of which only 800 are seen.  Further there 10 Verb classes out of which 4 we are going to study.

But how to find verb roots?

Verb roots can be found in two ways, by the traditional method, and by the modern method. The modern method is such that we remove the fundamental sound of the words. For instance, in words like bodha, smara, and hasi. A sound is common in all, hence we remove a sound so that we get the root of them, i.e. bodh, smar, has. Sounds easy right? However, this system might seem easy but is rarely used; to the contrary, the traditional system is used much more extensively among the scholars and grammarians. However, the modern method can be sued as of now for the beginning part, but as we move ahead we will gradually shift to the traditional method.

Verbs are usually classified into two classes; “atmanepada” and “Parasmaipada”, which we are going to learn further. Apart from this; there are words that behave differently according to the situation. For instance, Let us take the word gaccha, now here we can assume that the root word for gaccha can be gachh, well it’s wrong. The root word for gachha is gam. But it doesn’t sound proper; they are what are called irregular roots. They behave differently depending on the context of the sentences. This is another peculiarity of Sanskrit language. This increases the scope for adding more and more information by doing minor changes. We will learn about them in detail further.

As we studied in the upper portion that verbs are derived from the verb roots. Now moving further, these verb roots are divided into 10 classes, they are on the basis of how they from their stems. Further, these 10 classes are divided into two parts; Thematic and Athematic. Thematic means something that denotes the theme of the sentence, whereas, Athematic words are not related to the theme of the sentence.

Let us take a look at the ten classes to make you understand better;

Let us take a look at the example from both Thematic and Athematic class and how their words form.

Interestingly, all the roots form the thematic class is formed by adding ‘a’ /’अ’ to the root.

Now let us take a look at the athematic class.

In this class, ya stem is used to form verb roots. 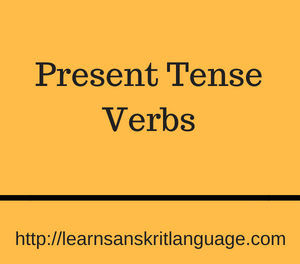