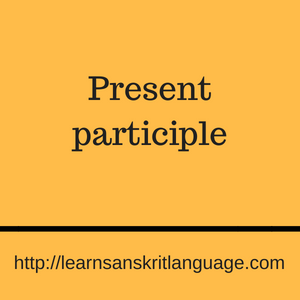 Present participle can be understood with the kind of ease that is unlike of any other kinds of participles. However, in the previous chapter, we dealt with how participle is different from the Gerund. In this chapter, we shall study the same in detail, and thereby augment to what was understood in the previous chapter. Do not worry; we’ll try to uncomplicate it as much as possible! Take a look at the table given below.

However, firstly we shall talk about the Atmanapadi root system and how would a present participle function as far as that is concerned. It happens in the way as

However, if one was to built a weak stem from the above mentioned strong stem, that is “bhavant”, the “n” can be removed and it would become “bhavat”.

Exceptions:
Well, there are always exceptions. But before that, we need to look at the norm, the norm nouns; for the Present participle is that it usually ends with –vat or –mat. However, there are exceptions to these. These exceptions are as follows.

1) An addition of an “i” is added to the feminine stem; however, it is added to the strong stem not the weak stem.
2) The masculine in the first case and in singular does not use any special stem. This can be explained with an example; gacchan remains gacchat even though bhagavat becomes bhagavàn.

Note: the difference in the “a” of the participle of bhagavat and that of gacchan

The table given below gives the example of Parasmaipada present participle in masculine form, in each of the cases. The example we are going to take is of “gachchat”,गच्छत्.

Now in the next table, we look at the present parasmaipada participle as it deals with neuter gender.

The participle words can create lots of doubts. For example the word “gacchati”, which means he goes but it can also mean “is the one who is going”. Words such as bhavate could also be participles and regular verbs.
Now let us take a look at how the verb functions when it comes to ātmanepada as well as passive. The syllables “-mana” is added to the original verb stem. This (masculine verb) word than ends in “-a”, however, the feminine form ends in -ā.
In the table given below are a few examples of the above-mentioned kind of words.

Now let us look at the examples of passive verbs.

The Atmanepada and the passive verbs share a lot of similarities. They may have the same ending and the same suffix. A major reason for this is that it is believed that the passive words in the Sanskrit language came for atmanepade words. Together they are also called mediopassive words.

First, we shall look at examples of case 7, in the sentence given below.

Note how in this second example, both the parts of the sentence have a similarity of gender and number. Also notice that when we change the tense from present to past, the way the sentence is formed remains the same.

Just like case seven, case six also deals with the formation of a sentence that deals with simultaneous action; however, this is done in a different way. As far as the case six is concerned, no participle is used. However, the word “being” is used in the absence of the participle. Just like case7, this can also be understood with an example.

It is in this way that the present participle functions with regards to gender, case as well as number. 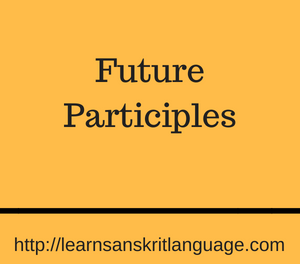 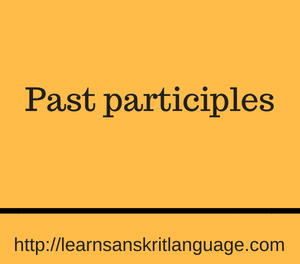