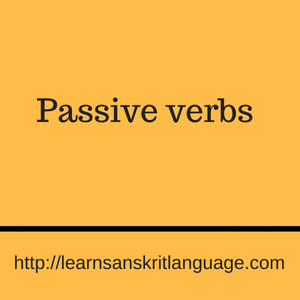 I remember the man.
The man is remembered.

Now take a look at the above example. You can, of course, notice the difference in them. There are a subject and the predicate whereas in the second example there is no subject, it could be anyone he, she, I or they. Such type of sentences that do not have any subject is called a passive sentence. The subject is not introduced in the context.

Now let us consider the following in Sanskrit. Pronouns in Sanskrit are very commonly seen. Almost in every verse, you can notice passive sentences in sanskrit.

We can see quite clearly the change that has occurred. But what exactly is the change?

Passive verbs take use of Parasmaipada and atmanepada. However, atmanepada words do not become passive as often as in Parasmaipada.

Passive words generally have atmanepada ending. To form passive word we need to add “ya” at the end of the stem. Like the following:

Now let us see the changes with vowels

Try pronouncing these examples without sandhi; you’ll realize the need for change, as it does not sound smooth.

Onee thing to note is that such atmanepada words were used in ancient Indo-European languages too, they are today known as “mediopassive” verbs; “medio” meaning “middle words” 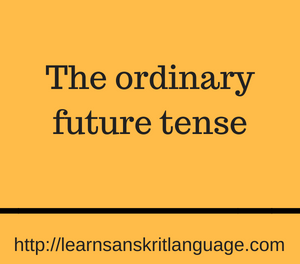