api is usually used to ask yes-no questions. For example;

The words that begin with ya, as in “yatra” or “yatha”, mostly define relative clauses. Whereas, the words that define correlative clause starts with ta as in “tatra” or “tatha”. However, in order to ask the question we need to add ka, ki, and ku to these words as a suffix

One important thing to note is that these words cannot be replaced with any other, for doing so will change the entire meaning of the sentence. ya is used to denote the relative part of the question whereas ka is used to ask the actual question

Now in order to ask questions, we can also use pronouns. The first pronoun that we are going to use is kim

किं तत्फलम्
kiṃ tat phalam
What (n.) is that fruit?

The pronoun kim is irregular in case1 and 2 neuter singular, but apart from this, this is a powerful pronoun which can be used in many ways;

We can also ask about nouns (subject/object) in the question

Pronouns used as an adverb

We have seen before that how adjectives can be turned to adverbs, for instance, sundar to sundaram. Similarly, pronouns can also be turned into adverbs. Let us take a look at their meaning after being change to adverb

Let us take a look at the example of kim

However, word kim changes its meaning in case 3 to “what is the point of?”

We have by far learned that how to ask questions now let us take a look at the words that are used for answering the purpose.
We studied that api is used to form a yes-no question, however, api can also be sued to make general questions. Let’s take a look at the example;

We have till now learned that api can be used for multiple purposes. So let’s take a look at all of them to avoid any further confusion.
• As we learned initially, api is used to form yes-no questions
• It makes the word “ indefinite”
• Following nouns and pronouns, Api also means “also” or “usually”
• Following the adjectives and verbs, api means ” although” or “even though”

Now let us talk about cid and ana, well these words are used following the k words in a sentence. Let us take a look at the examples to understand them better.

can however, is very rare compared to cid. In a sentence, it has a negative connotation.

न कश्चन
na kaścana
Not anyone 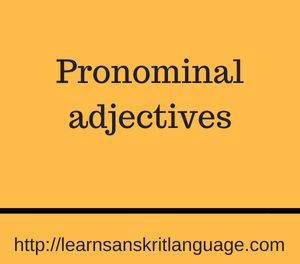