These nouns that end in I and u are present in all three genders. There is only one exception as far as the way in which they make endings are concerned.

It can be clearly noticed that there is a regularity as far as the dual endings are concerned and plural are concerned, however an exception is the case two plural ending which just has an “h” at the end, which is unlike the plural endings of other cases.

However, what can also be noticed is the irregularity in the Singular cases. It is in the following ways that singular endings can be understood:

As for case 1 singular, a visaarga is used.

Now we shall look at –ī stems, its behaviour pattern is the same as the –u stems. Please look at the table below to learn further about the same. The example we take is of vapi.

It is quite noticeable that the endings are the same as those above, however, what is also noticeable is that in the case one singular, the visarga is not used. Now we shall look at –a stems, they are what can be called regular, however, their features are odd.

Plural endings are similar to the nouns in the tables above this one; however, that is not the same with dual or singular endings.

Use of vidyāy in the cases 4 to 7 in the singular form.

Use of e endings in the entire singular and dual forms.

Now we shall focus on one more factor that leads to the formation of feminine nouns, this is tad. Please look at the table given below to learn further.

The patterns noticed are similar to that of –a stems.

As noticed in the a-stems as well, e-ending appears in the dual form here as well. However, a significant distinction is that in case 6, what appears is tāsām, instead of tānām. 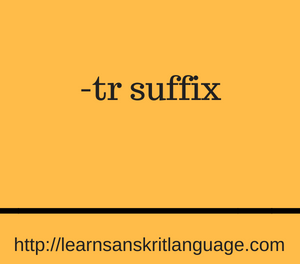 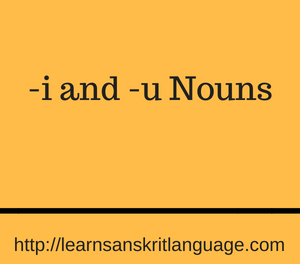