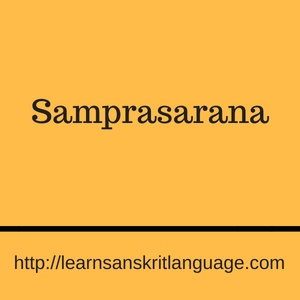 In this topic, we are going to cover two verb roots: gam and vad.

Now why such complex rule?

Well, there is a logical answer for this too.

In gerund, the nasal sound is removed from certain roots; gam falls into that category of roots. Hence, it loses its m and gives us ga, which ultimately becomes gatva. The same is the case with vad too. But vad is not as simple as gam root,

Hence Sanskrit provides us with a new feature here for such words. It is called “Samprasarana” it basically means “to extend” Samprasarana can make vowels turn into semivowels and semivowels into vowels. There are three major changes in Samprasarana, they are:

These roots are strengthened in the following way;

An important thing about Samprasarana is that its roots are strengthened backward.

Verbs following Samprasarana are most likely to change in the gerund form, which demands a weakened vowel and a suffix that starts with t.

Now, why this change occurred?

• Two tongue consonants of a different point of pronunciation cannot be together.
• If they are, then both of them become retroflexed.
• Roots that end in “c” will always have their “c” turned into a “k”. and roots that end in “j” will occasionally have their “j” turned into a “k”, depending on the verb root. Some of the examples of it are given below

We have so far studied that verbs can be transformed to medium and strong level, however, there are verbs in Sanskrit that cannot be strengthened to strong or even medium level. They are nind, jiv and, cint.

The reason why they cannot be transformed is that they are heavily double syllables, which means that their syllables are already very strong, even if we remove them. they are words with extra consonants even if we put them ao class they can only be transformed from nind to nindana, ji to jayana, and jiv to jivana 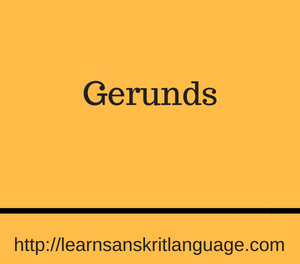 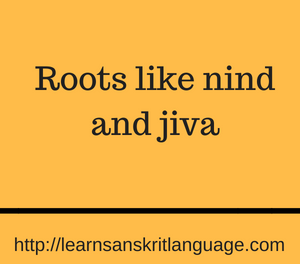 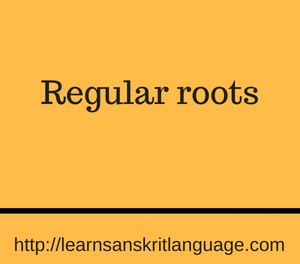