Sanskrit Noun: All about form.

The formation of a Sanskrit Noun is based on cases; there are basically eight cases in Sanskrit language, locative, nominative, genitive, dative, ablative, accusatory and instrumental. A group of a noun is called a declension; a declension is formed by noun whose cases are formed in the similar method.

The five declensions consist of how each case is formed by a noun. The first declension is the Long Vowel Systems. 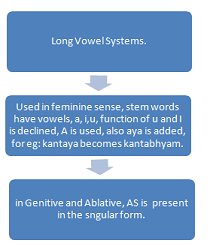 Now we learn the largest group of nouns, the a-stems. After considering the cases, this group has turned out to be the largest because the classification is based on only one distinction. 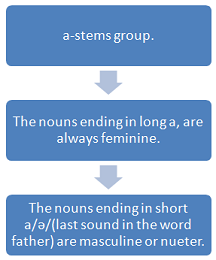 I and u-stems is another group of nouns which are given different suffixes based on gender.

R- STEM nouns refer to agents, such as helper. In this case, the neuter gender forms a secondary stem with the usage of I and u classes.

Consonant stems are off kinds, this can be illustrated in the diagram given below.

Pure consonant stem adjectives are those in which male and female adjectives have the same form and as for the neuter gender, it might not take up the adjective at all or take a stronger plural.

Consonant and I-stem adjectives, in these adjectives, consonant stems are used for neuter and masculine gender, as for the female gender, the suffix of I has been added.

These are the systems of Adjectives and Nouns for the Sanskrit language.