Sanskrit has been called an agglutinative language. Here’s the catch, agglutinative language is a language whose basic elements, even after experimentation with words remain the same. In order to understand this language, it is important to understand the compounds of Sanskrit. Sanskrit compound is also called nominal compounds and is generative in nature through their size may vary.

The indeclinable compound in Sanskrit and its role:

For example, when we add Anu to the word Kul, thus making it Anukul, in which the first part, Anu is primary and gas made the whole word an indeclinable, or rather, Ayayaibhaav.

The Determinant compound in Sanskrit and the role played by it:

Note that even though primacy is on the word fearing, what makes it a determinant is that it indicates, “Fearful of the Gods.” It has to correspond to the first word to make it a determinant. There are seven types of Tatvapurusha or determinants, namely, Instrumental, ablative, dative, accusative, genitive, locative. The names are given according to how they contribute towards the meaning formation.

The Descriptive compound in Sanskrit and its role. 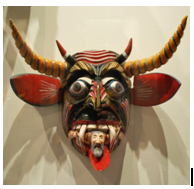 This picture would be called a cow demon and the important part of that word would be a demon, as it attributes that cow is a demon. A compound that is attributive or adverbial, which is consisting of an adverb, would be called a descriptive compound or Karmadharaya as it describes something about the first part of the word.

Dvigu is a subtype of the determinant compound, it is a number added to the word.

There is also a compound called “Madhyama-pada-lopi-samasa”, this is a compound which is a mixture of the descriptive and determinant compound. However, in this, a part of the word goes missing in the final form of the word. This can be better explained with an example.

Note: Removal of the word pujak.

Another type of compound formed by adding nouns to verbs is called upada samasa.

Dvandva or coordinate in Sanskrit language.

Samhara Dvandva: In simple terms, this refers to the formation of a metonym, or that one word may include all the parts of the whole. Unlike the Itaretara Dvandva, this is in the singular form.

Aluk samasa: In this kind of a compound, the end of a particular word when mixed with other words does not vanish, but is maintained in the resultant word.

Possessive compound or Bahuvrihi: this can be learned with an example from the English language. Take the example of the word, cotton- brain; this would be a Bahuvrihi compound because as the first part of the compound is not a part of itself which is the brain, there is no cotton in the brain.

The Iterative compound or Ameridita: The meaning in this compound is found through repetition, however, an emphasis is given on the repetition.

These are the various important compounds in the Sanskrit language.

The One with meanings