Let us not take difficult Use of verbs, in the beginning, let us begin with the verb “drinking”, and see how that verb fits into a sentence used in the third person.

Now this sentence can be understood by dividing it into two parts. 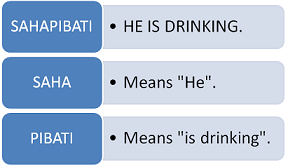 Several mechanisms are involved as  far as the the grammar of Sanskrit is concerned. However let us begin at the basics.

Here are few more examples of simple verbs and how are they transformed in the different context of the “person” in which it is used.

It is important for the beginners of Sanskrit language to notice the pattern that is evident through the column given above, please note that as far as the simple verbs are concerned, this pattern is going to remain the same.

Now we have to talk about a peculiar category of verbs.

Please note that as we go further, we shall also be introduced, because we are now studying derived verbs, to what is known as “noun prefixes”.

But before that, we shall study in some detail the “-aya “class.

It is essential for the learners to keep in mind that “-aya” class is only formed when the stem is strengthened to the medium level.

Given below is an example of the verb of “-aya” class. The word we shall take is the cur, which means steal, pronounced as “chur”. Before we move to the table, one has to bear in mind that factors which determine the verb formation are the “person” in which something is written and the number that it refers to.

Look at the diagram given below to learn further about how “chur” functions as a part of “-aya” class and derived verb.

Any suffix that has the presence of the vowel “i” will always use that vowel.

Itva-Itva or gerund is used when the verb does not have a prefix, for example, chur becomes choritwa, and steal becomes having stolen.

Ita: The suffix “ita” is used when any verb belonging to the “-aya” class has to be written in the past participle.

Simple Sentences : He , she and who