It is important to note that the most important part of any sentence is the verb, so verb has to be kept into consideration when one indulges in sentence construction especially in a language which has to be dealt with from the basics. The element that determines the way a verb functions in the simple sentences is called root form of the verb, root form in Sanskrit is known as “Dhatu”.

The transformation of the root form depending on the requirements of the sentence is based on three factors, the number, the tenses, and the person that the sentence interacts in. However, it does not depend on the gender, gender is one factor that is not taken into consideration while formulating the use of the verb form within a sentence. This can be explained with the help of a few examples. 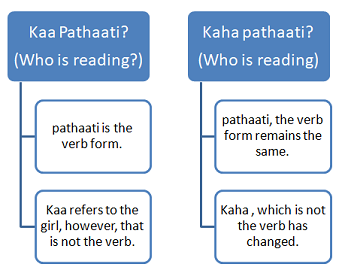 Furthermore, one must at all points in time keep in mind that Sanskrit is a language based on inflections. Therefore, take a look at the diagram given below.

It is in this manner that the system of infections can be used by the speaker to decide the verb form and formulate or transform the sentences accordingly.