USING WHEN AND INCLUSION OF TIME IN INTERROGATIVE AND ASSERTIVE SIMPLE SENTENCES.

Here we are going to learn about the Simple Interrogative words in the sanskrit language. when it comes to the application of the pronoun “when”, it is consequential for the learners to keep in mind that other parts of the sentence such as “You” will also change. Moreover, in the previous article we dealt with how to understand directions when it comes to Sanskrit language, now we can talk about how the inclusion of time functions in the Sanskrit language.

This can be explained with the help of a few examples.

Firstly, let us deal with using “when” in a simple interrogative sentence, in Sanskrit, when is called “kada”

When do they play?

This sentence is Sanskrit would be written as;

That is the place taken by when in an interrogative simple sentence. Now let us look at how does inclusion of time fit in the assertive sentence which would be the response to the above-asked question.

They play at eight o’clock.

It is important for learners to note that the form of the pronoun “you” has to be changed as the gender changes. Unlike English, there are two kinds of you in the Sanskrit language. This can be explained with two different interrogative sentences which use “you”. 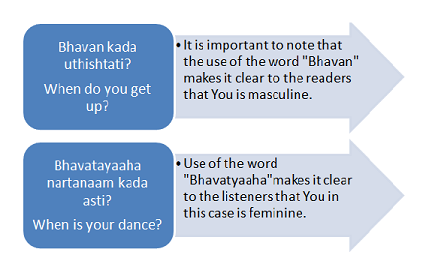 Looking at above-mentioned dynamics when it comes to making Interrogative sentences in Sanskrit language, one will realize that a sentence consisting of grammatical accuracy can be formed only when one is aware of how different Sanskrit language, it has its own rules and its own exceptions to these rules.

All these factors have to be kept in mind if one aspires to be a fluent speaker and a writer in this particular language. Each of these articles will give basic knowledge on how an aspiring Sanskrit learner should go about the language, however, it is only with practice that an individual can be proficient in a formerly unknown language.